The first of December marks the start of our Firestorm Campaign titled From Ember to Inferno. Our first blog is from hobby legend Paul Buckler who was super keen to get his initial army ideas in writing!

The first 'month' will run from 1st Dec until the 1st Feb to allow time for the initial army ideas to come together and allow any delays over Christmas.

Spawned from a whattsapp chat, a new tale of 4 gamers project, with myself, Chris, Aaron and Matt.  What should I take I pondered?  As per the norm I wanted something a bit less mainstream. I haven’t really done much in the way of destruction and 1 player from each alliance was the plan. So I had a look through the scrolls, and (following another post Tournament, journey home chat) plumped for spiderfang.  I love the Arachnarok model, so straight away I was having 4 of those.  Add in a boss on spider and riders and I am nearly done.  I wanted to use the ally capability a bit, just to give a bit more variety, so some Gitmob grots and squiggs fill out the planned list.

Fortuitously the end of our 6 month campaign will fall when the SCGT hits, so my army is heading there for a grand finale.  So anyone following this campaign will be able to see them up close and personal next May.  My General has a name, which will be revealed when as work starts on the project this December.

I am really looking forward to this and seeing if I can improve my painting a bit from my standard ‘tabletop’ finish, gonna add a few extra hours into each unit and see what level that gives me.  Hopefully pick up some tips from the guys @propainted, as well as the rest of the community at large. 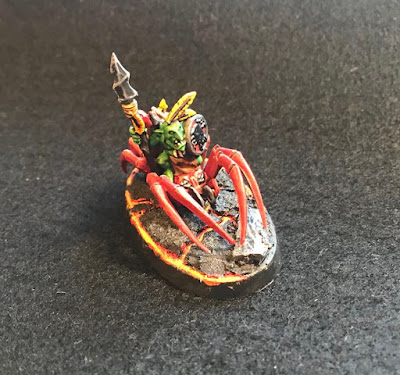 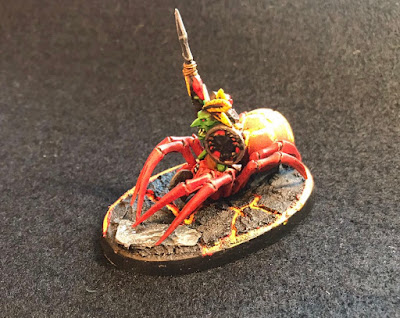 Matt - This is Paul's test model for his army of murderous Spiderfang Grots! I am really happy to see him pushing his painting standard and this can particulary be seen by the cleaness of the highlights around the joints of the spider. The green skin tone is also very nice with a yellowish ting which suits the smaller grots. I am particularly a fan of the basing, the effect is very well done and actually looks like volcanic rock - hopefully he will reveal the secrets of his basing in the future!